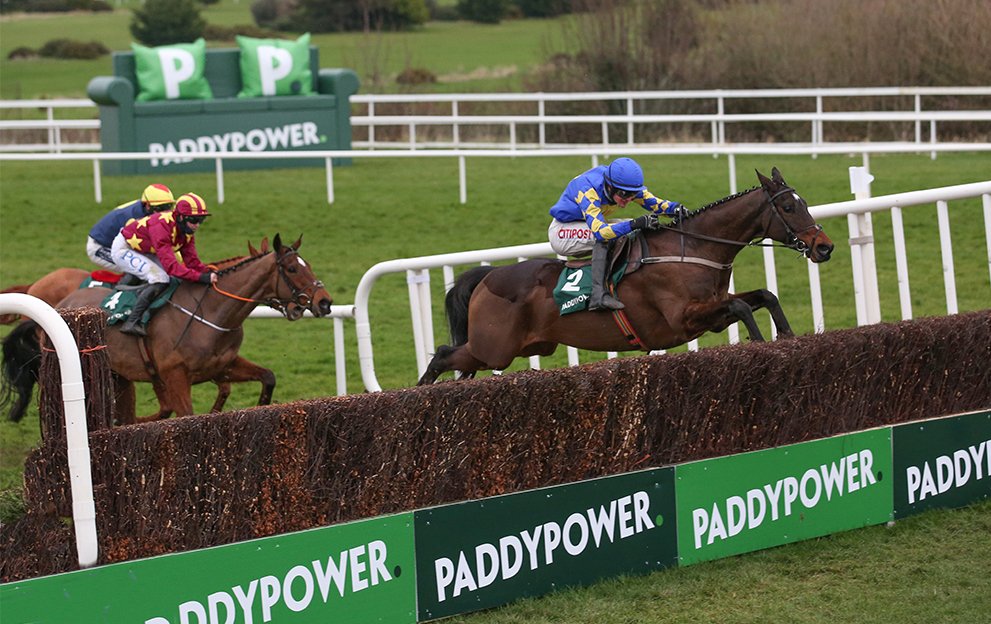 Entries for the Paddy Power Irish Gold Cup at Leopardstown on Saturday, February 5 have been revealed, with our main man offering an eye-watering €150,000 bonus if the winner can also land the Cheltenham Gold Cup 2022.

Only three horses have ever managed to do the double – Jodami in 1993, Imperial Call in 1996 and Sizing John in 2017 – and 11 of this year’s 18 entrants are currently entered for the Cheltenham equivalent.

Minella Indo is the standout name after landing last season’s Cheltenham Gold Cup but Henry de Bromhead’s charge has delivered two disappointing runs this campaign; finishing third in the Down Royal Champion Chase before pulling up in the King George VI Chase at Kempton on Boxing Day.

Galvin, another leading player for Paddy’s bonus, is one of six entries for Gordon Elliott. The Cheltenham Gold Cup second favourite stunned A Plus Tard to win the Savills Chase over course and distance at Christmas.

Willie Mullins, the leading trainer in the history of the Paddy Power Irish Gold Cup, boasts eight entries including last season’s winner Kemboy, who subsequently flopped in the Cheltenham Gold Cup and is set to skip this year’s Blue Riband at the Festival.

Tornado Flyer could be Closutton’s best chance to complete the double after the nine-year-old’s stunning success in the King George. He has failed to win in three starts at Leopardstown, however, and it remains to be seen whether the yard will be tempted by Paddy’s bumper bonus.

Mullins’ other prominent entry for both races is Asterion Forlonge, who was travelling well in the King George before falling at the final fence to raise further concerns about his jumping.

After taking a battering at last year’s Cheltenham Festival, Paddy was hoping the €150,000 bonus would tempt British trainers to come and have a go at beating us in our own backyard – and there are two entries from the other side of the Irish Sea.

Paul Nicholls is considering sending over stable stars Clan Des Obeaux and Frodon, although neither horse holds an entry for the Cheltenham Gold Cup and would need to be supplemented. The duo scored on their previous starts in Ireland, with Clan Des Obeaux winning the Punchestown Gold Cup and Frodon landing the Down Royal Champion Chase.