Rob Green made Clint Dempsey's day back in the 2010 World Cup thanks to his slippery shot-stopping efforts, giving the USA a celebrated 1-1 draw... Such was the unforgettable soundtrack of South Africa 2010. The vuvuzela hummed its way into our hearts with the all the charm of a jackhammer cracking open the pavement outside your bedroom window when you’re hungover.

Looking back to that time, the monotonous drone emitted from the stands finds a clear ringing resonance with England’s World Cup cycles of the noughties.

Generally qualifying at a strolling pace – as long as a brolly wasn’t called for – triumphant celebrations would usually start good and early with the E-A-S-Y group draw that would secure a second international title approximately six months before England’s Gold lamé Generation would have to kick a consequential ball at all. 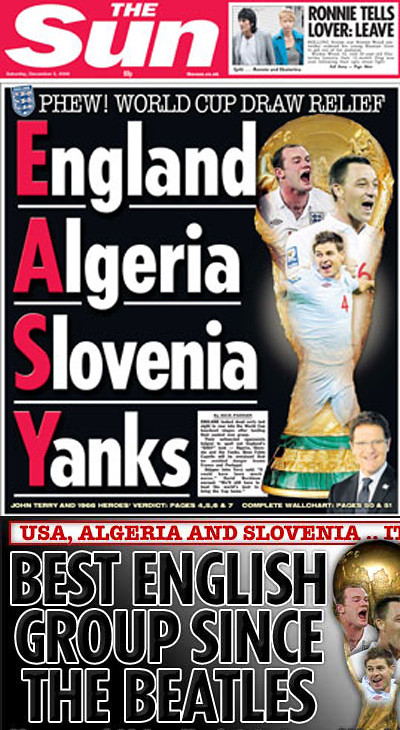 Getting your football bets on is E-A-S-Y with PaddyPower.com

When the petty inconvenience of actually playing some puny footballers from other nations rolled around, things would generally start out with a bluster of industry and attacking intent. If games lasted 25 minutes, Lamps, Stevie G, JT and the rest would have lived up to the presumptuous “golden” moniker, but confidence and energy always waned, chances dried up and tension accumulated to an inevitable crushing weight.

So it was in South Africa 2010. Though Germany’s burgeoning generation of future world champions would deliver the final blow, England’s last meeting with the US in the 2010 opener in the Royal Bafokeng stadium in Rustenberg in 2010 provided a sneak preview of the predictable failure. It would only take 40 minutes for England’s star-studded lineup to capitulate to an American team stocked with journeymen from across Europe and a smattering of MLS “stars”.

Manager Fabio Capello had encased the squad in the wearying tranquillity of the Royal Bafokeng Sports Campus in the host city of this opening match in the hinterland of Pretoria.

The camp has gained a reputation to match The Shining’s Overlook Hotel in the years since, not because anyone (to our knowledge) lost their minds or much of note happened, but because nothing did. According to reports, the players were so bored they took to watching a DVD of Wayne Rooney’s wedding to kill time.

Any resultant lethargy from their surrounds wasn’t evident in their start against the US though. Steven Gerrard, the captain’s armband flexing on his bicep, broke between the US centre halves and latched on to remarkably enduring stalwart Emile Heskey through ball after just four minutes to break the seal on England’s vintage crop of goals.

But former United goalkeeper Tim Howard would stuff a cork in the bottle for the following 86 minutes with a man of the match performance that would give his country another famous World Cup result against their colonial forebearers after the notorious 1-0 win in 1950 in Brazil.

Up until his ghastly gaff, few chances of moments of note were created – not surprising given the starting role of a pre-Hull and Sunderland Jozy Altidore (70 PL games combined, 2 goals) for the Stars and Stripes.

They wouldn’t rue their forward’s failings though, as crazy-eyed rapper Deuce Dempsey had something to drop a few bars about as he spun from the England skipper’s attentions on the edge of the D and struck a bobbling effort that sped straight towards the then West Ham stopper.

Who failed to stop it.

Despite getting two hands behind a weak shot, England’s number one quickly turned to zero as the ball spun across his open body and over the line before you could say “Massimo Taibi”.

Only informed he would be starting hours before the game, Green would manfully take the burden such a calamitous error dumped on him with a measured reaction that allowed him to make some important saves in the second half, but not even David Beckham’s positive vibes as lucky mascot on the bench could revive Capello’s men.

Rooney toiled up-front alongside Heskey, unleashing one threatening shot and setting up other efforts, while his much-malingned partner grabbed the best opportunity to undo Green’s work when allowed to advance on Howard’s goal unimpeded, but lashed his effort with a laser-like precision into the gut of the oncoming goalie.

The game would peter out, and the aftermath saw David James assume the gloves against Algeria, and keep a clean-sheet – in a 0-0 draw. Though it was Green’s leaky touch that would help extinguish the dying embers of the so-called golden generation’s flame, with England finishing second in the group after grinding out a 1-0 win over make-weights Slovenia, it seems, looking back, that the reverse-Midas act of Capello and his predecessors merits more scorn than the keeper’s momentary meltdown.

He would later feature in squads, and made a friendly appearance under Roy Hodgson in 2012, but would alwasy be tarnished by Rustenberg.

It’s enough to make you yearn for the vuvuzelas sweet din just for distraction’s sake.

Don’t slip-up, get your bets on with PaddyPower.com