Paddy's pumped for the Showcase Of The Immortals. 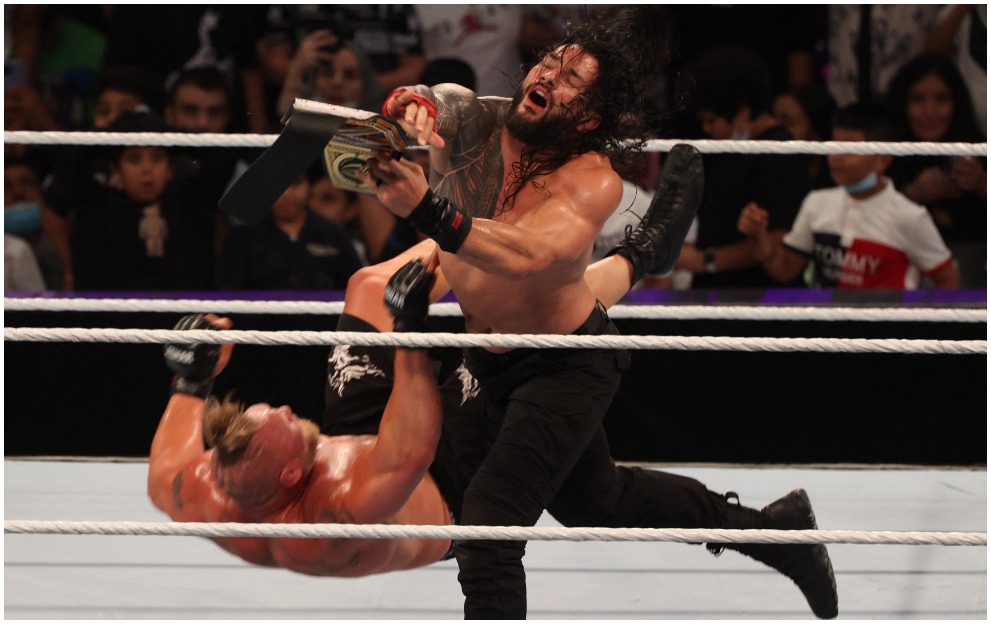 Wrestling is set to grapple Paddy’s attention this weekend as WWE bosses are promising ‘The Most Stupendous Two-Night Event In WrestleMania History’. Their words, not ours…

Our big daddy’s tasked his A-team of traders to draw up a whole host of betting markets for WrestleMania 38 which you can find on the Paddy Power website. Otherwise, we’ve rounded up the key information about this year’s spectacle below.

WrestleMania 38 will take place over two nights on Saturday, April 2 and Sunday, April 3, at the AT&T Stadium in Arlington, Texas. It’ll be a late one if you’re planning to tune in from Ireland or the UK as both nights are not due to start until 1am. Yikes!

What matches are set to take place at WrestleMania 38?

The big draw at WrestleMania 38 is the latest instalment of Brock Lesnar v Roman Reigns, which WWE bigwigs have branded ‘The Biggest WrestleMania Match of All-Time’. They love a big sell, don’t they? To be fair, it’ll unify the promotion’s two biggest prizes – Raw’s WWE Championship and SmackDown’s Universal Championship which are in possession of Lesnar and Reigns, respectively.

Just when you thought the Logan Paul chatter had died down, the YouTuber is back for his second appearance at WrestleMania after briefly taking part in last year’s event. He’ll be taking part in a tag team match with The Miz against Rey Mysterio and Dominik Mysterio.

Johnny Knoxville is also set to entertain wrestling fans by meeting Sami Zayn in an Anything Goes match. His Jackass experience should come in handy for that…

What is the WrestleMania 38 card? What tips have you got for WrestleMania 38?

I don’t believe Paul’s people would sacrifice his reputation in the boxing sphere by having him lose here, and the Mysterios are as perfect a fall pair as you could want.

Their family bond can go in so many directions storyline-wise that a loss to a pair like these two won’t harm them long-term.