Sheamus: Everyone went ‘what the f**k was going on’ when I won the title

The Sheamus Interview Part 3: Everyone was like ‘what the f**k was going on’ when I first won the WWE title

It was a special day for The Celtic Warrior. Back by popular demand, we’re continuing our journey through the storied career of WWE superstar Sheamus and we’ve reached what the big man considers to be the top of the mountain.

Believe it or not, the star of Celtic Warrior Workouts is the third fastest person in history to win the WWE Championship (the top prize in the wrestling business) after his debut.

The Dubliner needed just 166 days from his first appearance in June 2009 to win the title at the TLC pay-per-view that same year in a Tables Match against the great John Cena.

Despite enjoying some lovely local cuisine in our Paddy’s Japan Slam series, that day remains the most special of his life to date.

“People ask me what my favourite moment is and I’m always like, there’s so many,” said Sheamus.

“There are just so many special moments that lead to where we are now. The first person I called was my closest friend.

“I was like, ‘this is mad!’ I just had the title in my hand at the hotel room and the whole thing was just crazy, it just didn’t register at the time. Everyone was like, what the fuck’s going on?

“But when you win it, that’s great, it’s fantastic and you shock the world. But, then I had to go and prove to everybody (including myself) that this was not a fluke.

I’ve got to show people I deserve to have this title.

“I had it for a couple of months and lost it, but then I won it again at Fatal 4-Way in 2010. That was twice I’d done it and that’s when I could say to myself, ‘okay, it wasn’t a one-off’. They’re people that win the WWE title once in a blue moon, but I cemented my legacy by keeping the head down and kicking the s**t out of people.

After winning the WWE title, the next thing on the bucket list for Sheamus was his first appearance at a Wrestlemania event. That honour came at Wrestlemania 26 in 2010 at the University of Phoenix Stadium and the Irishman didn’t sugar-coat how he was feeling before his entrance on the Grandest Stage of Them All.

“My knees went weak, I’d never really seen anything like it,” said the three-time WWE champion.

“That’s why you see so many superstars like Triple H and The Undertaker come back for it every year. They all just want to be at Mania because of that feeling when you walk out through the curtain, it’s incredible. 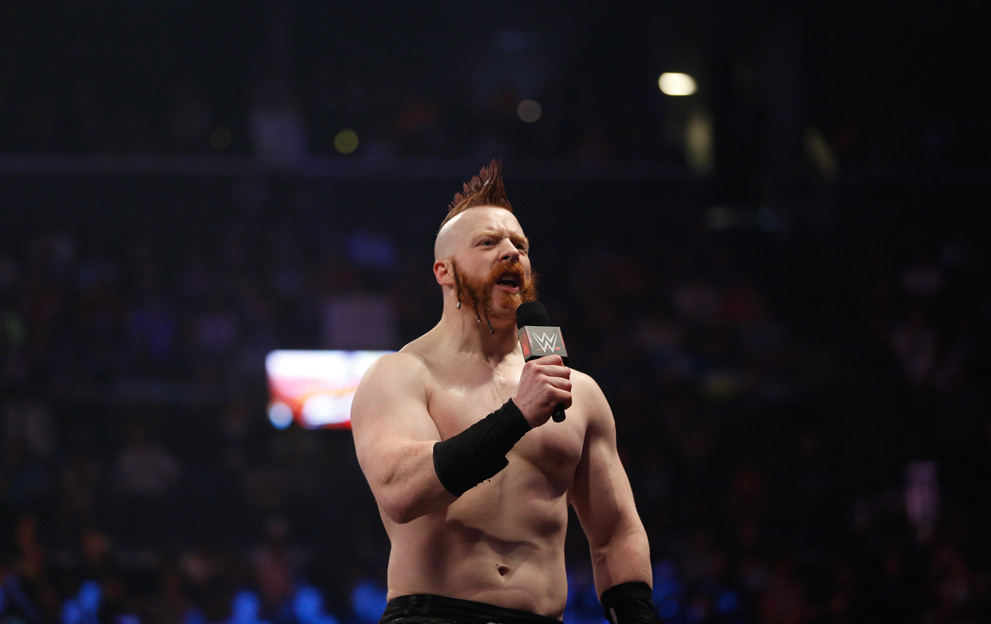 Sheamus just seemed to be walking from success to greater success in his WWE career at that time and marquee victories soon followed. He became the King of The Ring in 2010 and won the historic Royal Rumble match in 2012.

Many wrestlers would be happy to call it a career at that stage with those accomplishments in the bag, but not our Sheamus! He craved so much more…

“Nothing was enough, I was never satisfied,” said Sheamus.

“People ask me, ‘are you happy with everything?’ I’ll be happy in about 20 years when I retire, and I can put all those achievements in a case or something.

But, back then I was just looking for the next thing. I wanted that title. Nothing was ever enough.

Sheamus hit the wrestling headlines for a different reason after Wrestlemania 28 when he knocked off Daniel Bryan in just 18 seconds, to win the World Heavyweight Championship.

Funnily enough, the backlash to the result ended up catapulting Bryan to superstardom in the business, something Sheamus takes credit for these days with his tongue firmly in his cheek.

“Like that was the match that really helped launch Daniel Bryan. It actually started the night after Wrestlemania, it was one of the first times we had that post Mania Raw crowds.

“They were not happy with me. It was interesting, like a baptism of fire.

Sheamus quite proudly holds the record of being the only person to drop a Father Ted reference on Monday Night Raw, but the proud Irish export has no time for writers and producers wanting him to live up to the outside stereotype of his country.

“I’m the only person to drop Father Ted on Raw,” said the ring veteran.

“The next week there were a couple of Father Ted posters out there in the crowd. That was just what I enjoyed doing, sometimes I get some promos and they’re like Paddy Whackery sh**e, I hated that.

“The writers are probably thinking, this is what American people want to hear from an Irishman, but it’s not what they want to hear. But, sometimes you’ve got no choice in the matter and it just turns out sh**e. No matter how good you try and make it.

“But Father Ted, the Irish pop culture stuff and the Irish stuff that I was really into, that came across great. I loved doing that because I was passionate about it. But, I’ll stick with the Father Ted memories and forget the ones about the fucking – the bull and the three balls!”

See if your ruck is in with all the latest Rugby World Cup odds on PaddyPower.com