Christmas Eve is packed full of NFL games from Week 16 - here's our Multi-Game Bet Builder for the late games... 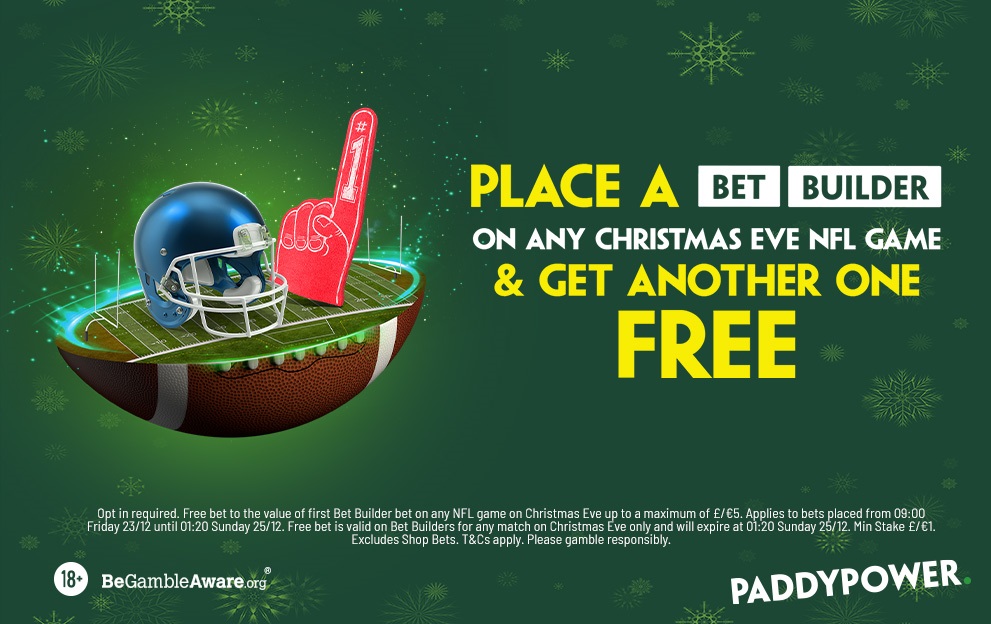 *A Bet Builder on these 4 selections pays at over 10/1 on PaddyPower.com. TAP HERE TO ADD IT TO YOUR BETSLIP INSTANTLY

Two of the league’s tightest defences clash on Christmas Eve in Santa Clara and we wouldn’t expect too much festive charity to be on display. The total has been set at 37.5 points because both teams allow fewer than 300 yards per game in total this season.

The Niners offence, however, has found its way to scores recently despite a swathe of significant injuries. Chief among those are losses at QB, where seventh-round rookie Brock Purdy has ably replaced Jimmy Faroppolo and Trey Lance before him.

Those would include Washington. Brian Robinson has been great as a rookie out of the backfield, but he will find it tough to make headway against San Francisco.

That means Washington will have to rely on Taylor Heinicke to make plays. He can do it in spurts, but that won’t be enough here. The Commanders have seen their postseason hopes dented by a tie and loss to the Giants in their last two games and that doesn’t bode well against a much stronger opponent.

With McCaffrey their main weapon on the ground and in the air, it should open up opportunities for the Niners’ other big names.

George Kittle doesn’t look the playmaker he once was but has seen an uptick in performances recently and, if San Fran control the game, he’ll get chances to make this total.

The question around Jalen Hurts’ health has swung this game in the Cowboys’ favour. Gardner Minshew looks set to deputise for the MVP-contending Philly QB, but that means a very significant shift in what the Eagles’ offence will hope to do.

However, the way Dallas’ defence has regressed in recent weeks will give a sliver of hope to Eagles fans hoping to win and clinch the NFC’s top seed despite Hurts’ likely absence on Saturday evening.

Over the last three weeks the Cowboys are allowing 50 yards more to rushers per game than they had all season. That includes almost 200 yard to the Jaguars’ rushers last week. They’ve also given up seven passing scores in those games.

However, this is a huge divisional game and Dallas need to put on a show after last week’s shock loss to Jacksonville. Even if Hurts somehow plays, he won’t be the same threat, and Minshew should not intimidate the cowboys considering he played in last season’s week 18 game against Big D, a 51-26 victory for the Texan franchise. It’s worth taking them -4.

The Cowboys’ ground game carries a genuine double threat in both Ezekiel Elliott and Tony Pollard.

The former is on a big contract, a firm favourite of owner Jerry Jones as an Arkansas product and has become the face of America’s Team in the last half-decade, but Pollard has looked the better back for two seasons and should really have the lead role by now. He has 12 total touchdowns on the season and should get another if the Cowboys put it up to the Eagles.

*A Bet Builder on these 4 selections pays at over 10/1 on PaddyPower.com. TAP HERE TO ADD IT TO YOUR BETSLIP INSTANTLY