Ruby & Rory give you a steer for our biggest Pick 5 giveaway in this massive triple rollover week! 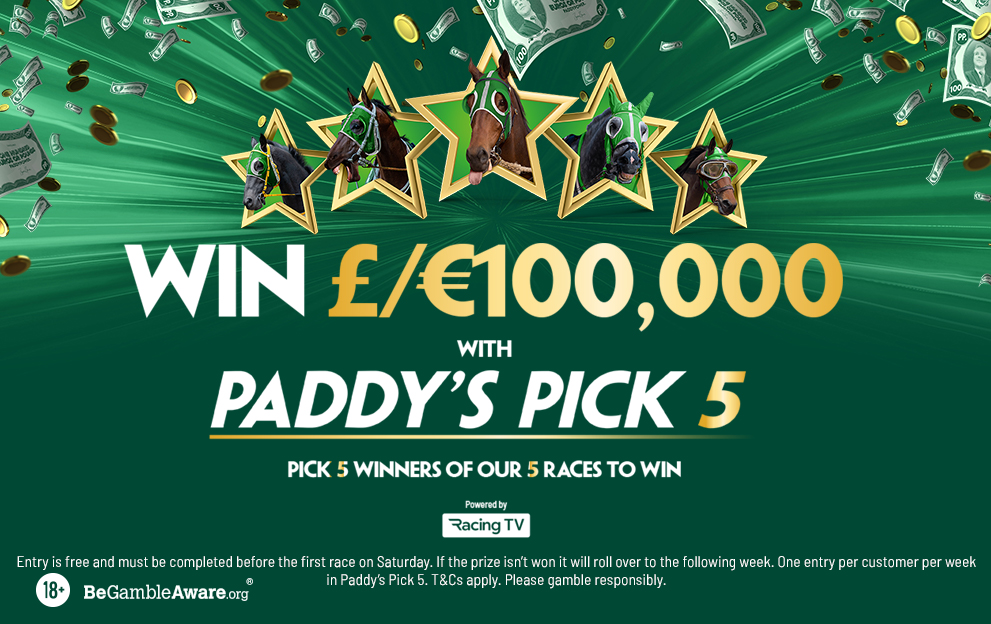 Last time the prize was claimed, 26 winners took home the Paddy’s Pick 5 loot on Saturday August 20. But the prize pot hasn’t been claimed since – which is great news for those entering our Saturday September 17 edition!

With racing action from Kempton and Haydock, we’ve drafted in racing royalty Ruby Walsh and top tipster Rory Delargy to share their top picks on the 5 selected races below.

Let’s get their verdicts…

I think it’s so hard to get away from SAKHEER. He was so impressive at Haydock last time out.

WALLOP shaped with huge promise on his debut at Newmarket when a close third to subsequent Gimcrack winner Noble Style. He took two significant bumps shortly after the start, but the ease with which he made up his ground was impressive, as was the gap of over seven lengths to the rest of that field that day. The form could hardly have worked out better.

It’s hard to get away from the favourite, QUEEN ME. She had a good run at York in the Lowther last time behind Swingalong with Matilda Picotte and Mawj behind her. That’s strong enough form.

I thought MINNETONKA was overpriced based on her form behind Lezoo in the Princess Margaret Stakes at Ascot, and has had excuses since. Minnetonka will appreciate the return to 6f on turf here, and has the form to make the frame, for all she has her work cut out to beat Queen Me.

I’m going against the Godolphin horses and backing HAMAKI. He won at Ascot last time out from Supagirl, who went to York since and was fourth behind Haskoy so the form has worked out OK. Adam Farragher claims 5lbs bringing the weight down to 1lb below his Ascot-winning mark giving him a great chance.

Godolphin dominate the market here, and I thought OTTOMAN FLEET was the one to side with. He was really impressive when winning the Listed Fairway Stakes at Newmarket on his second start given he stumbled badly just after the start, and ran well in the King Edward VII at Royal Ascot. He looks on a lenient mark, and should have more improvement in him after just three starts.

There’s a lot of hold-up horses in this race so that drew me to GIS A SUB. He likes to be handy without having to make it. He raced all the way to the line at York on his last start over 5½f as he had to make ground up. He looked like he wanted to do it after being gelded and he could be able to sit inside the frontrunners here without being hassled from behind. He could be in the mix all the way down the straight.

The one who appeals most to me at the prices is TINTO, who ran very well to finish a close fifth in the Stewards’ Cup, and did too much too soon when a respectable eighth behind Summerghand when were with the latter at York last month.

Tinto has the benefit the 7lb claim of Mark Winn – seen to good effect when winning the apprentice handicap at Pontefract on Thursday – and I believe that weight off his back could make a big difference in a race where the majority have little to hide from the handicapper.

It’s a more important maiden hurdle than it has been in a long time, I’m gonna go for RIAAN, in the Reynolds colours for Gordon Elliott and Davy Russell, a combination that won this race last year with a 4/7 favourite, Chemical Energy. He should be a much bigger price, and I think Riaan’s got a good chance off an OK debut at Galway Festival for Reynolds, Russell & Elliott.

Do you like the look of our pundit’s picks? Or do you reckon you can do better? Head over to our free to play competition to play, with this week’s £/€100k jackpot!

The ever-thrilling Ts&Cs can be found here and you must submit your entries before the first race of Paddy’s Pick 5 is off. Good luck! IT’S FREE!