Cheltenham Day 2: All the drama of Wednesday’s races as it happened What day at the world’s greatest racing festival!

And there was plenty of entertainment on the track too – here are the headlines and results from an epic day’s racing:

But if you weren’t as shrewd as our guest pundit don’t despair – there are still two more days to go and Paddy’s got a plethora of picks for day three:

And here are some of the top bets for Thursday from our menagerie of racing clever-clogs’.

Wednesday 4:50pm | And the Champion Bumper is underway!

Has to be another Irish winner in this?

The tipsters back up the market, with Elle Est Belle the third most fancied among the pundits…

Kilcruit and Sir Gerhard the two clear frontrunners in the betting for the closing race of day two where we’re paying four places: 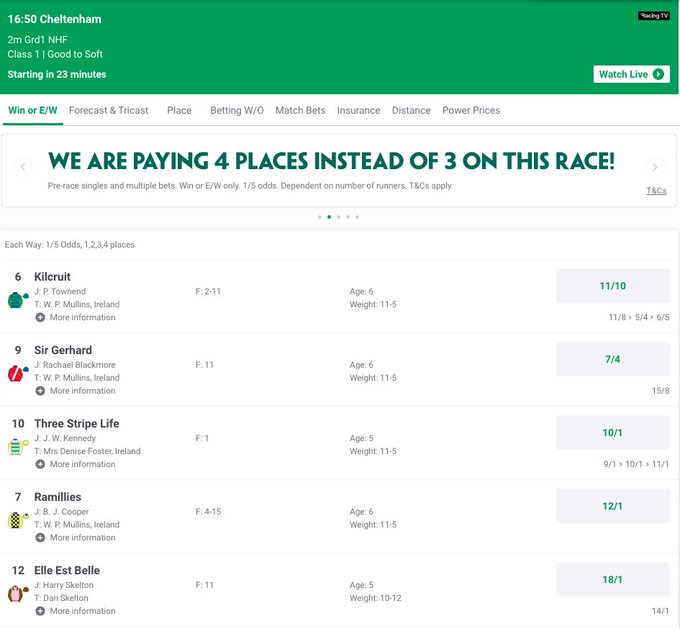 One back for the UK as Sky Pirate just keeps ahead of Entoucas at the line to win the penultimate race of the day. 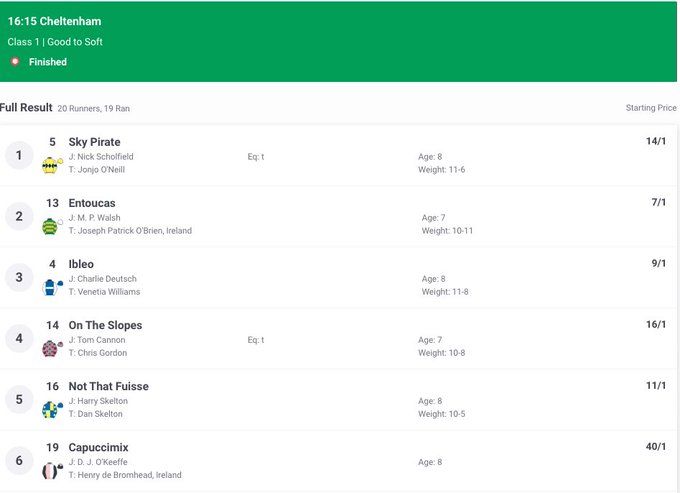 Wednesday 4:16pm | But they’re off cleanly

At the first attempt, with Embittered going down before US and Them leads as they approach the second last….

Wednesday 4:08pm | Not that anyone is keeping count

And there’s a lot of Irish runners in race six…

“Jordan Gainford is a young jockey with a bright future on what we have seen of him. He is a relative unknown to punters in the UK, but he has been causing quite a stir in Ireland and has managed to ride six winners this season.

He has picked up a choice ride now with last year’s winner CHOSEN MATE. Gainford’s 7lb’s claim almost gets this horse back to the mark he won this race off last year and I’m going to take a chance on him to win it again.” 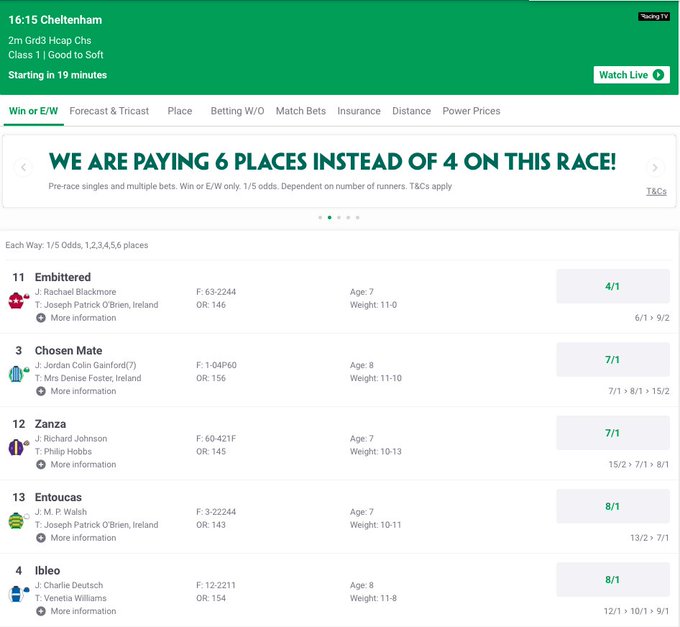 Wednesday 3:57pm | Another win for Goldbridge

Mark Goldbridge has made his second successful pick of the day on our watchalong before signing off for the day by challenging Peter Crouch to do better on Friday.

You can watch the stream back below. 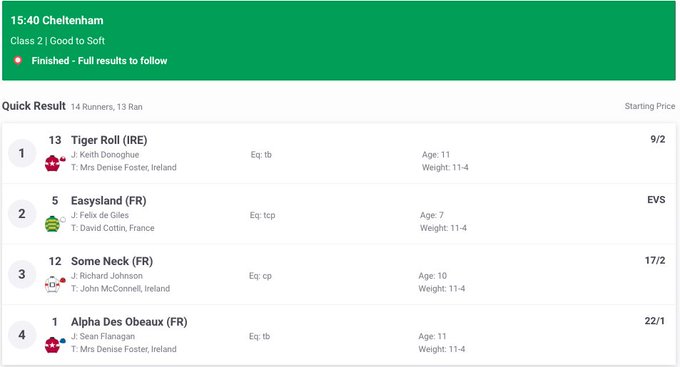 Tiger Roll handles the final fences and wins by a distance from Easysland to collect a fifth win at the Festival.

Builds a five-length lead from the rest now, 2 hurdles left….

Minus a jockey with Rachael Blackmore unseated for a second time today. Defi Des Carres leads from Tiger Roll.

At our cheat sheet for this one.

Easysland is a popular choice…

The Cross Country is next up at Cheltenham, and we are paying on FOUR places for this one.

But can’t hold off the relentless Put The Kettle On, who pushes past the Mullins horse and win the Queen Mother Champion Chase, adding it to the Arkle last year and becoming the first mare to ever win it. Nube Negra gets into second, Chacun drops to third. 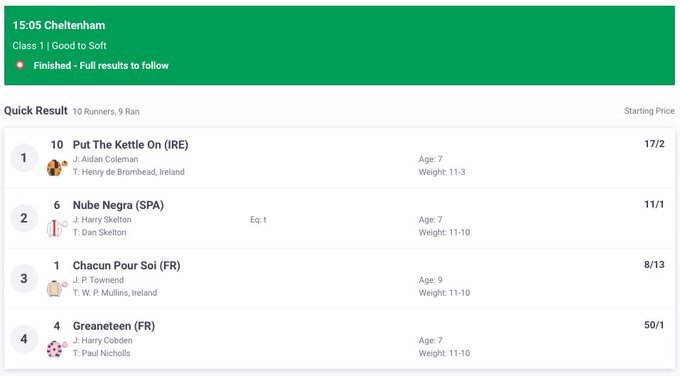 Wednesday 3:11pm | Rouge Vif and Put The Kettle on make the early running

Chacun Pour Soi marking them behind

Wednesday 2:58pm | And a late withdrawal…

After Altior earlier in the week was withdrawn, Politilogue is a non-runner for Paul Nicholls and won’t get to defence his title from a year ago. 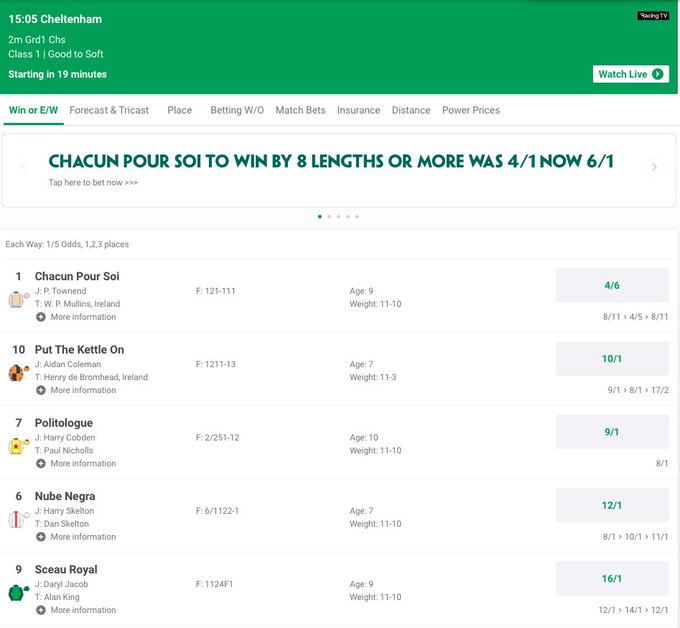 Get the odds here.

Here’s our guide to the runners and riders, and you can check in with Ruby for his take on the race as well.

Wednesday 2:46pm | There will not be a bigger smile today…

Than jockey Richard Condon’s after winning that.

Well, unless you had a tenner on him.

Blue Sari pursues, but can’t close and falls at the last as Heaven Help Us steams away to win by eight or nine lengths. What a run at 33/1! 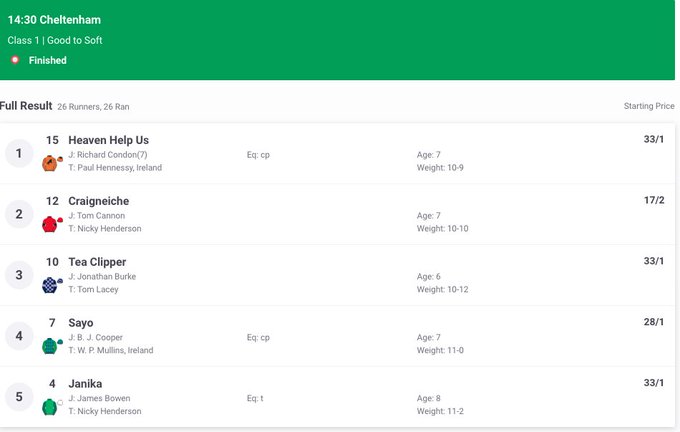 No, not another false start, but the early leader.

Lots of shouting, just waiting for a few ‘f**ks’ on the mic.

And now they’re off from a standing start….

Or not. False start.

We’ll try again in a minute.

Next up is the Coral Cup, and we are Paying on a massive SEVEN places for this one #CheltenhamFestival

“Nicky Henderson has won this race for the last two years and has trained four winners in total of a contest that often falls to unexposed hurdlers with the potential for improvement. Amongst several lightly-raced contenders it was MONTE CRISTO that stood out as the one with potential to be much better than his mark of 145.

With only four runs under his belt for the master of Seven Barrows, he put a disappointing seasonal debut at Aintree on soft ground behind him when winning at Kempton last time on better ground to suggest he may have any amount of improvement in hand.”

As ITV bring his mum on. Reports that Willie is sweating bullets as he waits for the baby pics to emerge…

Wednesday 2:07pm | Shout out to the Blackrock Clinic Massive

Willie Mullins thanks his heart surgeon in his post-race interview after Monkfish stayed upright in the closing stages, admitting it’s the most nervous he’s ever been watching a race (!)

Meanwhile, on our Mark Goldbridge watchalong, our special guest is cycling through Irish top 40 hits of the 1990s…

Wednesday 2:02pm | And Monkfish takes it

Despite the efforts of the jockeyless Eklat de Rire to interfere and a stumble, Paul Townend guides him home, Fiddlerontheroof.

How far he’s come since being slung off the force.

The heavy favourite leading the way in the early stages…

Cheltenham tips: Our pundits’ cheat sheet for all Wednesday’s races

And a whopping 83.33% of pundits surveyed in our review of today’s tips say he’ll win too.

Can anyone stop Monkfish? 1/4 now… 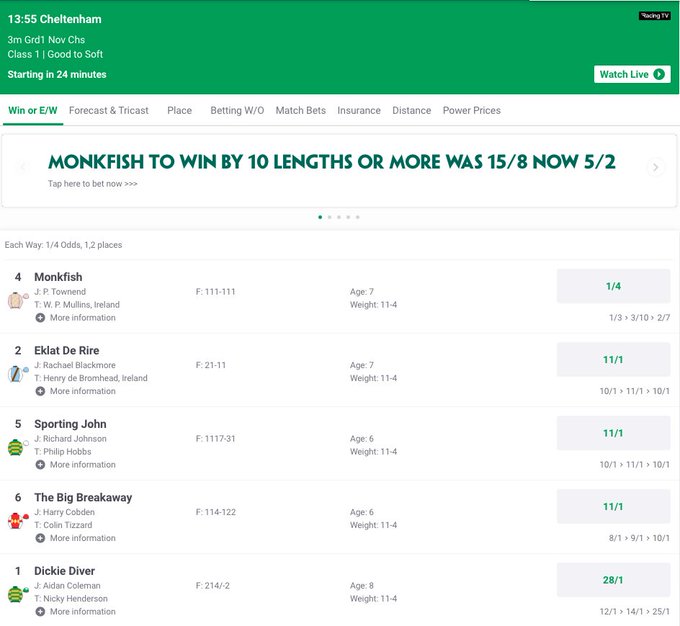 Get the odds right here.

Tony McCoy’s obviously’s been getting inspirationalquotes.com on Facebook recently as he namechecks Johan Cruyff on simplicity in praise Rachael Blackmore, before Mick McCarthy wishes everyone a happy St Patrick’s day while sounding like an extra from Last of the Summer Wine…

Result confirmed in the opener: 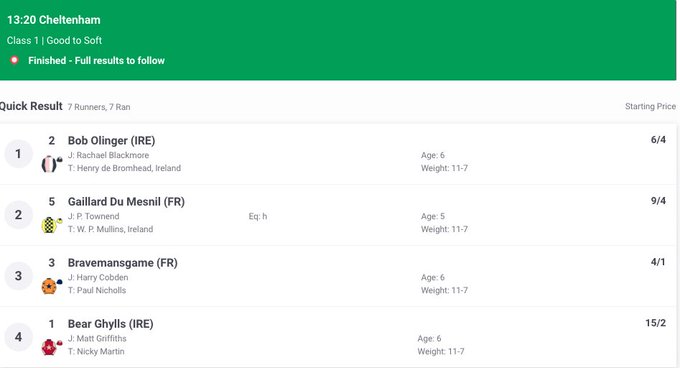 Bravemansgame leading still, two from the finish… Bob Olinger pushes ahead, away from the long-time leader and Gaillard Du Mesnil to win by a few lengths.

Another win for Rachael Blackmore, Henry de Bromhead and Ireland.

Matt’s straight in to congratulate the winner again.

We’re off on day two!

Til the first race. Bear Ghylls a big mover this morning into 15-2.

Can only be a matter of time before he drinks his own p*ss. 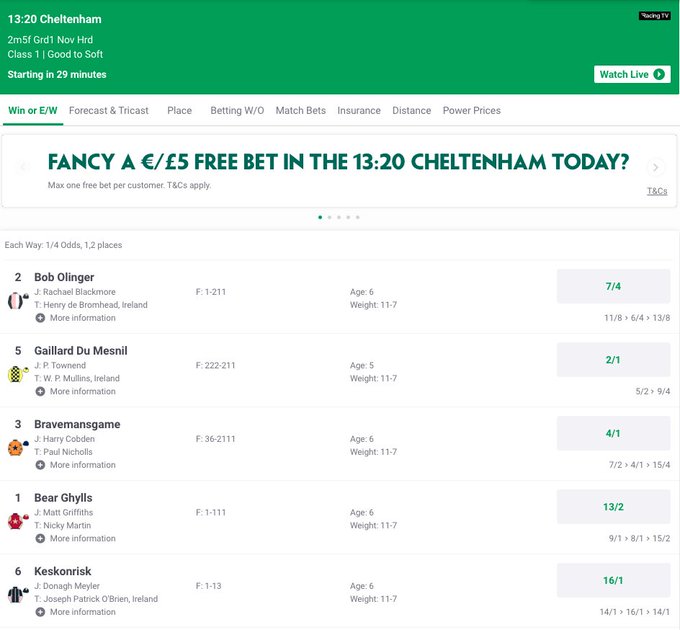 The thumbnail for our @markgoldbridge #CheltenhamFestival watchalong. You just know it’s going to be good.

Tune in at 1pm! pic.twitter.com/wS9MGVKqhJ

If you don’t want to rely on dodgy tips from your mates, we’ve plenty to guide you on day two.

Or, if you’d rather use your football knowledge to make your selection for the main event, we’ve a quiz that’ll let you do just that.

And if you’re clueless about football, Newcastle could be looking for a new mana… I mean, we do have a stonking cheat sheet from our pundits that’ll have you talking to your mum like your Ruby Walsh in a matter of minutes.

And we’ve been a little, tiny bit naughty and scoured everywhere else for tips too if that’s not enough.

What an opening day to the 2021 Cheltenham Festival.

We had Honeysuckle imperious in the Champion Hurdle with Rachael Blackmore taking the record books and chucking them right out the window, Black Tears getting a nose ahead of Concertista in a thrilling Mares’ Hurdle finale, and – most importantly – the bookies took a pasting as three heavy favourites won in the opening four races to give punters the upper hand on day one.

Here are yesterday’s results if you haven’t checked your bets (seriously? Priorities.)

You might notice that the Irish invaders dished out quite a drubbing in the Prestbury Cup stakes too, winning five races to UK trainers’ two.

In fact, so total was their superiority that Paddy is already calling it quits for that accolade and paying out to anyone who backed the boys and girls in green to be triumphant in 2021.

That’s 21 more top-class races to look forward to, with seven more today, including:

And, after the Pundits lads yesterday, we’ll have our special guest, Mark Goldbridge, in our watchalong today – Liverpool fans should enjoy that.

Today the one and only @markgoldbridge takes the reins – live on here, Facebook and YouTube at 1pm! pic.twitter.com/81sRVp8lLC

If you’re stuck for a tip, we’ve got plenty on Paddy Power News from Ruby, Walsh, Matt Chapman, Gina Bryce and the rest of assembled pundits.

So, stick around for all the latest from Paddy Power at Cheltenham 2021!