We're back in action at Santa Anita and here's the Racing Post's best bets. 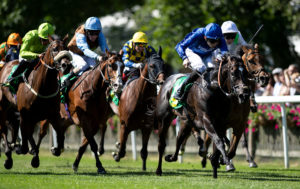 Bolden and Eagle In The Sky are both interesting newcomers having caught the eye in the mornings of late but the one to beat is clearly INTENSE. Mike Harrington’s colt only found one too good on his debut and that experience could prove to be vital this evening.

GOODTINGSCOMINPINK won a valuable maiden over C&D a couple of weeks ago and that form gives her a big chance in this contest. Sutro edges out So Much Happy to be the pick of the remainder.

SHANGHAI TRUFFLES edged out Buyback over slightly further at Golden Gate last month and should confirm the placings again. Untouched Elegance could be a danger and is interesting upped in trip

Tromador keeps hitting the crossbar and was just in front of Swamp’n Ain’t Ez on the first of three consecutive second placings. However, if a gelding operation helps spark even a modicum of improvement in INCLUDE THE TAX then he could prove too strong.#

MUCHLY was third in Listed company when trained in the UK by John Gosden and stepped forward from her American bow to take third over a mile here. She should be at her peak now and can confirm her superiority over Catch The Eye and Lavender. Unicorn is a big danger.

DEBT MONGER was no match for a subsequent winner over track and trip back in February, but he has shown a decent level of form and this contest might not take too much winning. That said, Brickbat made an encouraging debut, while World O Luck and Pour On The Cole aren’t out of it.

Tips for Santa Anita in summary: