Golf Insider: McIlroy ticks all the right boxes at 8/1 for the Open The revamped golf calendar means the oldest major championship is now the last in line on the schedule and if your name’s not Tiger Woods, Brooks Koepka or Gary Woodland, winners of the first three of 2019, then the pressure is well and truly on to get your act together and put yourself in the record books.

With The Open making history itself this year as it visits an Irish links for the first time in 68 years, and returns to Royal Portrush, that adds an extra level of pressure for the golfers about to play in front of home fans. Expectations will not be greater than those for Rory McIlroy, who shot a course-record 61 on the revered Dunluce Links as a 16-year-old amateur in 2005 and whose major successes alongside those of fellow Irishmen Padraig Harrington, Graeme McDowell and Darren Clarke have done so much to bring The 148th Open back to these shores.

With the North of Ireland Amateur Championship staged at Portrush annually, knowledge of these links is ingrained in Irish golfers but that familiarity is compromised by those expectation levels and is one of the fascinating aspects of deciding who will win this year’s Open.

Here are five factors to consider in this week’s race for the Claret Jug. PORTRUSH, NORTHERN IRELAND – APRIL 2: The Open championship flags make their debut at Royal Portrush Golf Club during a media event on April 2, 2019 in Portrush, Northern Ireland. The Open Championship returns to Royal Portrush for the first time since 1951 this summer between 18-21 of July. (Photo by Charles McQuillan/Getty Images)

As the only major championship played annually on links terrain, The Open is not everyone’s cup of tea but it can be a taste a golfer can acquire and two-time champion Padraig Harrington has questioned any golfer that chooses to play Royal Portrush this week who has not played any competitive links golf in the preceding weeks.

“I do think links golf is different. You’re giving up some shots if you don’t play some links golf in the couple of weeks coming up to (the Open),” Harrington said. “There’s no better way to understand your clubbing than when you’ve got a card in your hand, and if you under-club there’s a little bit of pain and you remember it.”

Portrush has the potential to provide plenty of pain, with penal rough that will be difficult to rescue par from and enough holes to take driver out of play and tone down any aggressive thoughts.

“Mid-iron play and finding fairways is going to be the key,” McIlroy said following a practice round there last week.

Longer-term links experience also counts. Though nine of the past 10 champions have been first-time Open winners, almost all have done so on the back of a top-10 finish in the tournament in previous years. Only Louis Oosthuizen is the exception, his 2010 win at St Andrews coming in the wake of three successive missed cuts, not exactly an indicator of the glory that followed.

For the most part, though, look for at least a previous top-10 finish. With showers forecast from Tuesday through to Saturday in Portrush, you can discount a fair number of fair-weather tour pros used to high temperatures and blue skies. As Corporal Jones in Dads Army might say, “they don’t like it up ’em” and The Open invariably gives the field plenty to think about and put up with in terms of weather conditions.

Much like the links terrain, changeable conditions and wind directions are not to everybody’s liking and nor do they suit an ailing golfer struggling with back problems or the rigours of age. Combine Tiger Woods’ lack of competitive golf, never mind links golf, since the US Open, and his missed cut at the PGA Championship having not played since his Masters victory four weeks previously and you begin to question his ability to compete as well as he can in Portrush, a course he will not have played competitively before.

Which leads us to point number three. Northern Ireland’s Rory McIlroy plays from a bunker on the 4th fairway during a practice round at The 147th Open golf Championship at Carnoustie, Scotland on July 17, 2018. (Photo by Paul ELLIS / AFP) (Photo credit should read PAUL ELLIS/AFP/Getty Images)

Much has been discussed about McIlroy’s preference to play the Scottish Open the week before Portrush rather than a more suitable links course and set-up at Lahinch in the previous week’s Irish Open. In an age where the elite golfers get nosebleeds at the thought of playing more than two or three weeks in a row and the WGC-FedEx St Jude Invitational coming up in Memphis the week after The Open, something had to give in the build-up to the major and McIlroy chose to play competitive golf immediately before heading to the Antrim coast, retracing the steps to his previous Open victory in 2014 when he played the Scottish the previous week.

Jon Rahm went the opposite route, playing and winning the Irish Open with a stunning weekend of 64-62 at Lahinch before taking a couple of days off, going to see his mate Rafa Nadal at Wimbledon and returning to Ireland to practice on links courses. Shane Lowry has done the same, playing Royal Dublin this week before heading North but recent history at
The Open has shown that playing the week before can reap its rewards a week later.

Of the past 10 Open champions dating back to Stewart Cink in 2009 at Turnberry, six had played the Scottish with Phil Mickelson winning seven days before his Muirfield triumph in 2013. Two more lifted the Claret Jug having played the previous Sunday on the PGA Tour at the John Deere Classic and secured top-three finishes. Only two Open champions did not play competitively in the week prior. GULLANE, SCOTLAND – JULY 21: Phil Mickelson of the United States holds the Claret Jug as he answers questions after winning the 142nd Open Championship at Muirfield on July 21, 2013 in Gullane, Scotland. (Photo by Stuart Franklin/Getty Images)

Go deeper through the places and the picture becomes less clear. Of those players not winning The Open but finishing in the top five since 2009, only 16 played the Scottish Open, two played the John Deere and 30 did not play the week before The Open.

If you’re looking for a winner, look to the Scottish Open but if it’s a place, the stats suggest a week off before Portrush.

PORTRUSH, NORTHERN IRELAND – APRIL 2: The Open championship flags make their debut at Royal Portrush Golf Club during a media event on April 2, 2019 in Portrush, Northern Ireland. The Open Championship returns to Royal Portrush for the first time since 1951 this summer between 18-21 of July. (Photo by Charles McQuillan/Getty Images)

Clearly setting a course-record 61, as a teenage McIlroy did 14 years ago, gives a golfer a certain inside track, even if the Dunluce Links have been altered since, removing the original 17th and 18th holes and inserting two new ones in the middle of the sequence. McIlroy has been reintroducing himself to Royal Portrush over the last few years, playing the 2012 Irish Open there, trialling the new layout in 2017 and playing several practice rounds since. His comfort there is evident but so too is hometown boy Graeme McDowell’s, whose qualification for this week’s Open thanks to a top-10 finish at the Canadian Open in June, was a relief to everyone in Irish golf.

As previously mentioned, every Irishman in the field this week will have played Portrush as an amateur (Shane Lowry won the North of Ireland there in 2009) and as a pro in 2012 and that will count for a lot this time around as the home golfers and their fellow veterans of that Irish Open look to hit the ground running.

But then again, for these Irish boys, there is pressure and plenty of it and if any of them manages to lift the Claret Jug late on Sunday afternoon it will be thoroughly deserved. The fact only three home players – Harrington in 2007, Lowry in 2009 and McIlroy in 2016 – have won the Irish Open since 1982 or that the highest-placed Irishman at Lahinch two Sundays ago was Cormac Sharvin in a tie for 16th are signs that getting the job done in your own backyard is not as easy as it looks. The tournament favourite and 2014 champion with three top-five finishes in this tournament since, including a T2 at Carnoustie last year, McIlroy is to the manor born in Royal Portrush. Yet just as his strenuous but unsuccessful efforts to complete the career majors grand slam at the Masters have shown, the Holywood star has not fared well under the intense glare of attention on his performances.

Still, and not for the first time in the majors this year, McIlroy ticks all the boxes, has great form with two wins on the PGA Tour this year, is dropping putts and striking the ball as well as ever. Four consecutive rounds in the 60s in Scotland bode well but then again, there’s a tougher task ahead. Former North of Ireland champion at Portrush and playing a lot of good golf with the greatest consistency of his career this year. Has a victory in Abu Dhabi and joint second behind McIlroy at the Canadian Open. That has propelled him back inside the world’s top 50 and to third in the Race to Dubai standings.

Portrush born and bred even if the accent has crossed the Atlantic, McDowell succeeded in qualifying for his hometown Open this week with a T8 at the Canadian Open in June, sinking an outrageous 33-foot putt to seal the deal and claim a place. That took guts and he followed up with a T16 at the US Open on his return to Pebble Beach nine years after his US Open triumph. Missed cuts at both Lahinch and the Renaissance Club in his last two starts are not a good sign, however.

The two-time Open champion may have the Ryder Cup captaincy on his plate but an opening 63 at Lahinch in the Irish Open two weeks ago was a timely reminder that when he is on his game, the 47-year-old can be a match for anyone on a links course. 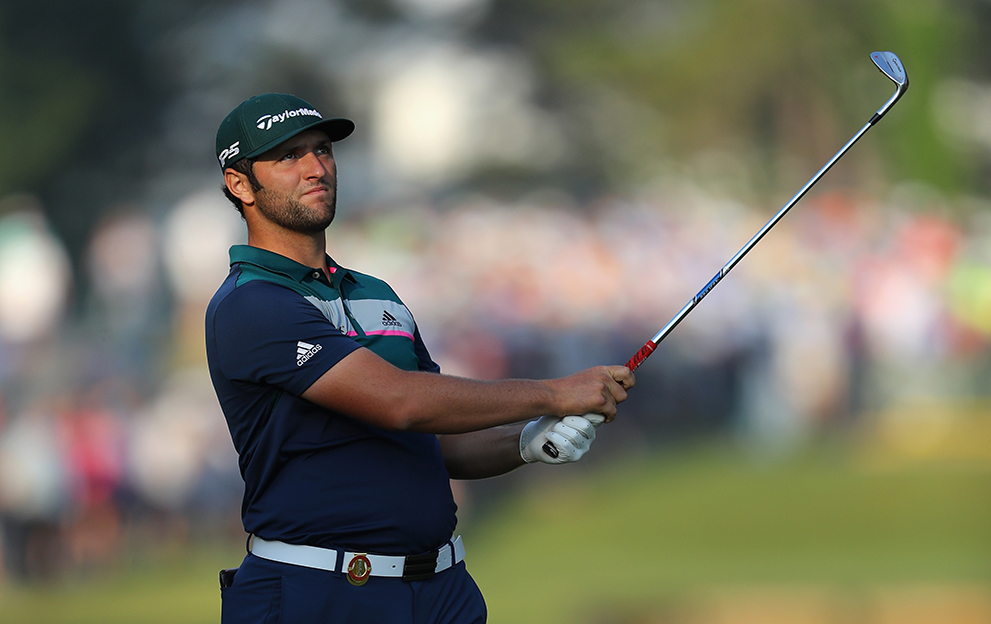 And the Men Who Can Stop A Home Win

Irish Open champion at Lahinch two Sundays ago and with closing scores of 64 and 62 the Spaniard is wonderfully primed for the test ahead. After three Open failures will consider his links apprenticeship complete and also brings in consistently good form with a T3 at the US Open and T9 at the Masters.

Four-time major champion who does little to impress between those big-time tournaments but who cares? This is, once again, major time and the world number one has the pre-requisite top-10 Open finish on his resumé, a tie for sixth at Birkdale in 2017.

The 2016 US Open champion, former world number one and current No.2 has come close at The Open before, letting slip a 54-hole lead at Sandwich in 2011 when Darren Clarke capitalised. Has runner-up finishes this year at both the Masters and PGA Championship, completing a career grand slam of second places at the majors.

Like McIlroy, tied for second behind Molinari at Carnoustie 12 months ago and former Silver |Medal winner for low amateur at The Open. Just made the halfway cut at Carnoustie but had weekend scores of 64-69. Has not played since finishing T3 at the US Open.