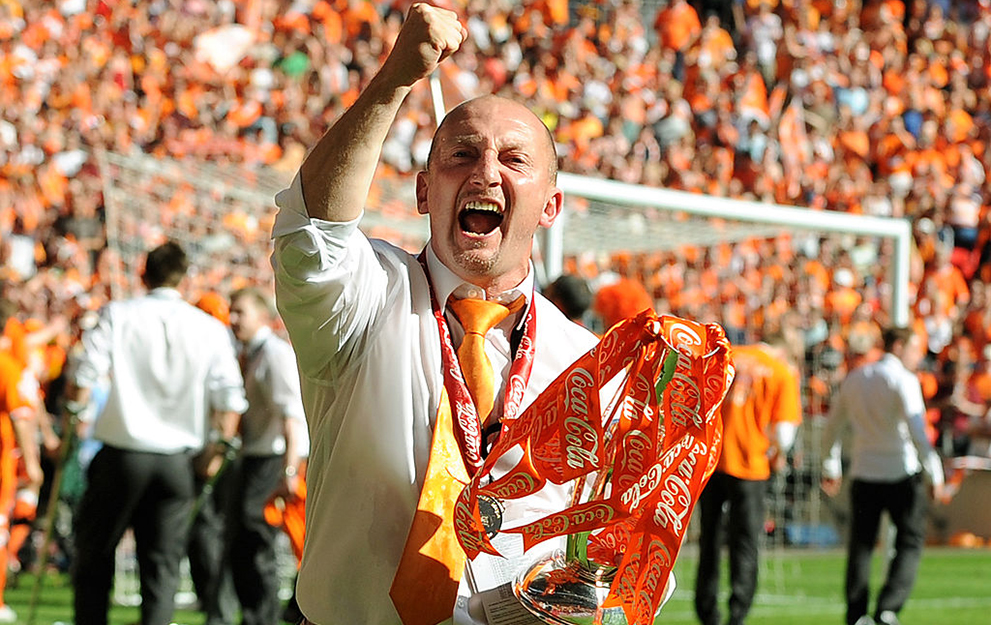 The late May Bank Holiday weekend has traditionally been the time when the Football League play-offs have finally closed the domestic season. Of course the main event is always the Championship show-down – or as Sky like to call it, “the most expensive game in world football”.

Down the years there have been some real humdingers as teams get the opportunity to saviour the glory of winning promotion to – as Sky like to call it – “the promised land”, before their inevitable relegation the following term. Here’s five of the best playoff finals.

Glenn Hoddle was still regarded as being relatively sane when he guided Swindon Town to the nascent Premier League in 1993, condemning Leicester to their second consecutive Wembley heartbreak. He even opened the scoring in his role as player-manager as the Wiltshire side raced into a 3-0 lead with 53 minutes on the clock.

Then came Leicester’s response and within 16 minutes, with Eileen Drewery unable to come to Hod’s rescue, the East Midlands side were back on level terms after an extraordinary turnaround. To their credit, the Swindon lads didn’t let their heads drop and with just seven minutes left of normal time, Eileen must have been there in spirit as Hoddle’s side were awarded a penalty, which Paul Bodin despatched as coolly as you like.

It had been a meteoric mangerial rise for Hoddle, whose two years at the helm at The County Ground had attracted admirers from the upper echelons of the game. As Town fans got ready to hit the Premier League, Hoddle decided to jump ship and signed a contract at Chelsea, leaving his assistant John Gorman to suffer the humiliation of an immediate return to the second tier, recording just five wins and conceding what was then a record 100 goals.

Two years after Swindon’s epic win it was Bolton Wanderers’ turn to taste play-off victory also by the odd goal in seven against Reading. After 12 minutes it looked as though the mass of Bolton fans had made a wasted journey to the capital when goals from Lee Nogan and Adrian Williams had put The Royals in total command of the match. It should have been more by the interval, but Stuart Lovell failed to convert a penalty which the Berkshire side would pay dearly for later on.

With the Premier League being cut the following season from 22 to 20 clubs, there were only two promotion places up for grabs. Sensing that they might never get another crack at the big time, with 14 minutes remaining Bolton finally woke up and, thanks to Owen Coyle and Fabian de Freitas, forced the game into extra-time.

Reading looked spent and Bolton took full advantage when Mixu Paatelainen and another de Freitas goal sent Trotters fans into delirium. The following season saw Bolton mostly rooted to the foot of the table before relegation was confirmed on the penultimate weekend of the campaign.

The late 1990s were a halcyon period for play-off finals and in 1997 Crystal Palace did to Sheffield United what Leicester had done to them just 12 months earlier.

Steve Claridge was the most hated man in South-East London in 1996 after his last-gasp extra-time goal had took Leicester up and left Palace players crestfallen on the Wembley turf. A year later and in a game fraught with tension, David Hopkin righted the wrongs with a 30-yard effort with just 10 seconds of the contest remaining.

The Scottish midfielder was out of contract at the end of the season and the Eagles rewarded his endeavours by off-loading him to Leeds ahead of the new campaign. In time honoured tradition, however, Palace spent just one season in the top-flight – but more worrying times were ahead as they went into administration in 1999.

Many regard this as the best game to ever grace the old Wembley on a scorching hot afternoon at the Twin Towers, which by the end had shredded the nerves of the coolest of customers. It started fairly quietly with ace marksman Clive Mendonca giving the Latics a 23rd–minute lead they kept until half-time. Then the blue touchpaper was lit when everyone’s favourite Irishman, big striker Niall Quinn, brought Sunderland level.

Eight minutes later and the Black Cats were in front thanks to serial goalscorer Kevin Phillips. But Mendonca, a boyhood Mackem, was seemingly on a personal crusade to get Charlton to the top tier and he got his side level with 19 minutes remaining. Shortly after, Quinn put Sunderland ahead for the second time in the tie before Rufus, this time without Chaka Khan (one for the teenagers), made it 3-3 with five minutes to go.

Into extra-time and first blood to the Wearsiders as Nick Summerbee made it 4-3 before Mendonca completed his hat-trick just four minutes later. As referee Eddie Wolstenholme blew for time, out came that old cliché about neither team deserving to lose the game. But thanks to Michael Gray’s sudden-death penalty blunder, Sunderland did and Charlton were back in the uppermost level of the English football pyramid. No prizes for guessing what happened next.

Ian Holloway’s Blackpool side had sneaked into the play-off positions, but had enthralled crowds all season long with their swashbuckling approach. Nobody, however, could have predicted the first-half of football served up in the final against a Cardiff City side that had finished the regular campaign two places above the Seasiders.

After 45 + 1 dramatic minutes, Wembley had witnessed five goals, the first of which went in after just nine minutes thanks to Cardiff striker Michael Chopra (who was known as “Chops” after joining Roy Keane at Sunderland).

That lead lasted only four minutes, with Charlie Adam levelling for Blackpool. In a frantic eight-minute spell before the break, Joe Ledley first put the Bluebirds back in front only for Gary Taylor-Fletcher and one of football’s scariest ever looking players, Brett Ormerod, to turn the game on its head and send ‘Pool into the big time. Where, naturally, they lasted just a solitary season.