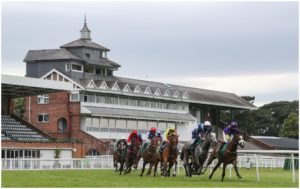 Not that this would have come as a surprise to most clubs. The Norwegian teenager has been at the top of scouting lists for some time.

A previously warm working relationship with compatriot Ole Gunnar Solskjaer at Molde would seem to put Manchester United, a club with a vacancy for a striker and a desire to freshen itself with youth, in pole position. There are, though, a trio of stumbling blocks.

The first, that Erling’s father, Alfie Inge, was on the wrong side of an infamous tackle by a United legend, the second that the younger Haaland proclaims himself a Leeds United fan; his ambition is to bring the Premier League title to Elland Road.

Those two can be smoothed over relatively easily. Many players end up at their boyhood clubs’ rivals; Rangers fan Kenny Dalglish at Celtic, Evertonian Jamie Carragher at Liverpool for two examples.

Time and money can heal all wounds and uncertainties.

What may be more concerning for United – and indeed other clubs – is the identity of Haaland’s agent, none other than Mino Raiola.

United have history with Raiola, and a rocky history. Paul Pogba, whose desire to leave Old Trafford is little secret, is Raiola’s blue riband asset of the moment, though the 51-year-old has already moved on to a new generation of talent.

With Haaland such hot property and Raiola having pulled the string behind one of the European transfer summer’s biggest moves – that of Matthijs de Ligt from Ajax to Juventus in a deal that could eventually reach €85m – it suggests that Raiola’s own nose for talent is just as acute as a multi-million-pound club scouting operation.

Moise Kean’s rather surprising move from Juventus to Everton was also engineered by him.

“That fat idiot – that wonderful fat idiot,” as key client Zlatan Ibrahimovic called Raiola in his autobiography, has been a mainstay of the high-end transfer market ever since the Swede began his nomadic career through European football’s elite. “A bloke in jeans and a Nike T-shirt and that belly, well, like one of the guys in The Sopranos” was Zlatan’s first impression of their initial encounter.

“My agent, my friend, my adviser” was Zlatan’s more formal description of a relationship he and Raiola’s clients enjoy with the Italian-born Dutch national.

“I’m constantly on the phone to Mino…Mino is a genius.” And before Zlatan made him notable, Raiola had been the man behind Pavel Nedved’s move from Czech football into being one of the best players during Serie A’s golden era of the late 1990s and early 2000s.

Those players on his exclusive list of clients can expect to become rich beyond the wildest dreams of their humble beginnings.

He too – controversially so – has become fabulously wealthy, from the relative rags of his family restaurant in Haarlem to trousering a reputed £41m from Pogba’s move back from Juventus to Manchester United.

To Raiola, his charges are “family” and he takes a patrician’s view of dealings with clubs, officials and sponsors. And once his players’ careers are finished, the promise is that they will be able to live off the money they earned, banked safely with no hare-brained, risky investment schemes being taken on.

Such empathy is not extended to those on the other side of the fence.

Sir Alex Ferguson infamously labelled Raiola “a twat” when Pogba left Manchester United the first time around. “I distrusted him from the moment I met him,” the United manager wrote in his book Leading. “Our first meeting was a fiasco. He and I were like oil and water.”

The image of Raiola as an operator who gets the best financial deal for his client and himself is well earned. And so is the sense that his clients are never likely to be one-club men, stalwarts in the style that Ferguson favoured.

Mario Balotelli is at Brescia these days, his ninth club at age 29, and he joined that Serie A lesser light having been cut loose by Marseille.

The combination of Raiola’s hard-talking negotiations and Balotelli’s free-spiritedness has led a player of a genuinely huge talent down a series of blind alleys once his relationship with Roberto Mancini broke down for the final time at Manchester City.

AC Milan and Liverpool, clubs struggling to emulate former glories, proved poor fits for a player who needed an arm around him. In an interview with the Financial Times, Raiola admitted he should have advised Balotelli to stay at City, where he was loved by fans and many of those around the club.

Henrikh Mkhitaryan is another client whose career nears nomad status.

At the time he joined Manchester United in the summer of 2016, he looked the odd one out of a trio of Raiola clients who signed that summer.

Ibrahimovic was the senior striker Jose Mourinho needed, and Pogba was the franchise player that United’s execs wanted. The talented but inconsistent Armenian playmaker Is precisely the type of player that Mourinho has binned on multiple occasions and Arsenal, his next club, had a surfeit of similar players.

He had left Borussia Dortmund with the reputation of being the best player in Germany, but the trajectory since has been a downward slope.

Romelu Lukaku cut ties with Raiola not long after he moved from Everton to Manchester United when the suggestion had been that he would have preferred to return to Chelsea. That proved an unhappy move for all parties concerned, perhaps save the agent who took a fair chunk of the transfer fee.

Lukaku’s decision and the problems that others, including Pogba, have had in joining a club that is ill-fitting for their talents do not appear to have affected Raiola’s cachet too much.

Haaland, De Ligt, Kean and others suggest he will be having his say in the transfer market for some time yet.