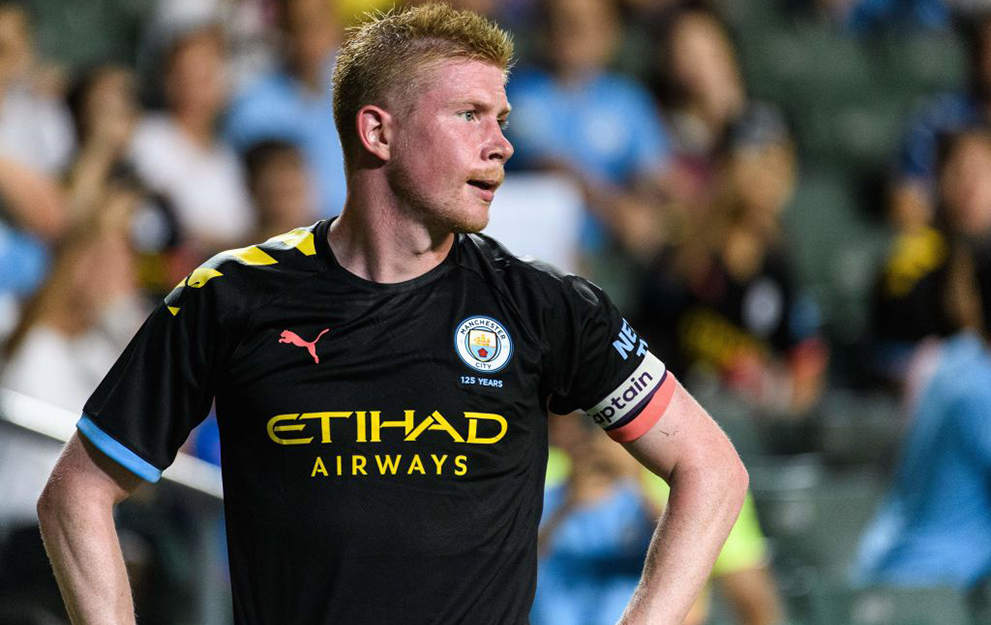 “Those clubs leave China with a new-found respect and new fans; Manchester City leave China with neither,” read a comment piece, written in English, which accused England’s champions of being ‘orientalist’, the implication being that local journalists were excluded while the ‘Manc pack’ received far greater access.

That sent the club into PR overdrive. With timing that may or may not have been coincidental, its official website launched a news story in which players talked of being “amazed” by the reaction they had received in Shanghai. “We went to the Old Town in Shanghai and it looked really nice,” said Kevin de Bruyne, Belgium’s answer to Bill Bryson.

While dismissing the Xinhua version of events, Pep Guardiola was even more effusive. “To come to Asia and experience the culture, the restaurants – it’s amazing to get to know other people,” he gushed.

That, though, was accompanied by comments that suggested why City players and their manager might have been less than “hail fellow, well met” on their trip to the Far East. “It’s a crazy schedule and we’ll kill our players sooner or later, we cannot sustain it for a long time,” he said, referring to a some of his players having been involved in summer international tournaments.

“We cannot forget we are starting the season and [Riyad] Mahrez hasn’t finished the previous one.”

Few could argue with Guardiola that leading players are being put through a relentless schedule. In the football trade, 2019 is referred as a “non-tournament year” but that has not been the case for players from Africa, South America and in the Concacaf region.

The globalisation of the game has come at the cost of its players’ energy levels but, equally, what cannot help matters is their clubs dragging them halfway across the planet for training camps in climates that players do play in over the course of an English autumn, winter and spring. The majority of pictures from the Far East and Australia, where City, Manchester United and Chelsea have been touring, have featured players wreathed in sweat.

Flesh has been pressed, sponsors have had their moment in the sun and fans have got to see their heroes in action but how much use such adventures are to preparations for a new season remains open to question. Until Arsenal’s executives finally got their way, Arsene Wenger was resistant to the idea of taking his team to Asia or America, and preferring the rarefied air of the Austrian Alps. Sir Alex Ferguson, meanwhile, a confirmed Atlantacist, was OK with a trip to the USA but is said not to be have been enthused by the thought of a trip out to Asia.

The likes of Unai Emery, Ole Gunnar Solskjaer,  Guardiola, Jurgen Klopp and now Frank Lampard, managers of clubs with their eyes on revenue streams, have no such self-determination, and are in no position to gripe about a summer schedule. Instead, they have to make the best of things.

And that has often involved the blooding of youngsters, with Manchester United fans able to compare teenager Mason Greenwood to Robin van Persie when his strike against Inter Milan was reminiscent of the Dutch master. Liverpool left-back Yasser Larouci hit international headlines when he was felled by a vicious foul by Sevilla’s Joris Gnagnon at Boston’s Fenway Park.

City, meanwhile, have featured a set of players who may well be never heard of again: Nabili Zoubdi Touaizi, Iker Pozo La Rosa, Alpha Richard Dionkou anyone? With respect to the likes of Greenwood. Tottenham’s young Irish buck Troy Parrott and Eddie Nkeitah, who has been in the goals for Arsenal, there is a sense of youngsters making up the numbers.

Barcelona fans out in Japan got no sight of Lionel Messi, resting up after the Copa America, and the same has been true of many other stars. With such personnel missing and managers’ commitment to the matches rather less than devotional, any idea of these matches being remotely competitive is just about null and void. The presence of Gareth Bale in a Zinedine Zidane-coached Real Madrid team against Arsenal on Tuesday night said it all.

That is becoming an uncomfortable truth for the organisers of the International Champions Cup, in which 11 European clubs plus Mexico’s Chivas Guadalajara are in a league table which Arsenal were topping by Wednesday morning.

The competition has pretensions of being a more than a series of glorified friendlies with the fiercely ambitious executive chairman of the rather ironically named Relevent Sports, Charlie Stillitano, hoping his event can become the football attraction of the summer, a key date in the calendar. However, the ICC’s league table has shrunk from 18 to 12 clubs with neither Barcelona nor City, perhaps the two best teams in Europe, taking part.

When such an under-amped tournament follows on from a brilliant Champions League season and looks rather too close to the dreaded European Super League for comfort, then a couple of reasons for it failing to capture the imagination in Europe are made explicit.

Meanwhile in America, the crowds are down on previous iterations.

The attendance for Arsenal’s match with Fiorentina was 34,902, with fewer than half the seats filled. There was a time, five years ago, when the summer event did look likely to become full part of the calendar, specifically when Manchester United lifted the International Champions Cup by beating Liverpool 3-1 in Miami. This looked the beginning of a brave new world for United, under new manager Louis van Gaal.

Their trophy was collected in front of record crowds, but then came reality and a Premier League opening-day defeat to Swansea. A summer schedule of half-paced matches against half-fit teams had proved little use in preparation for the rigours of properly competitive action. And it was ever thus with friendlies.

The likes of Guardiola have always known this. He and his peers, the managers of elite clubs, must instead grin and bear their summer of distractions.

Find a full list of odds on the International Champions Cup, the world’s greatest football tournament, over on paddypower.com