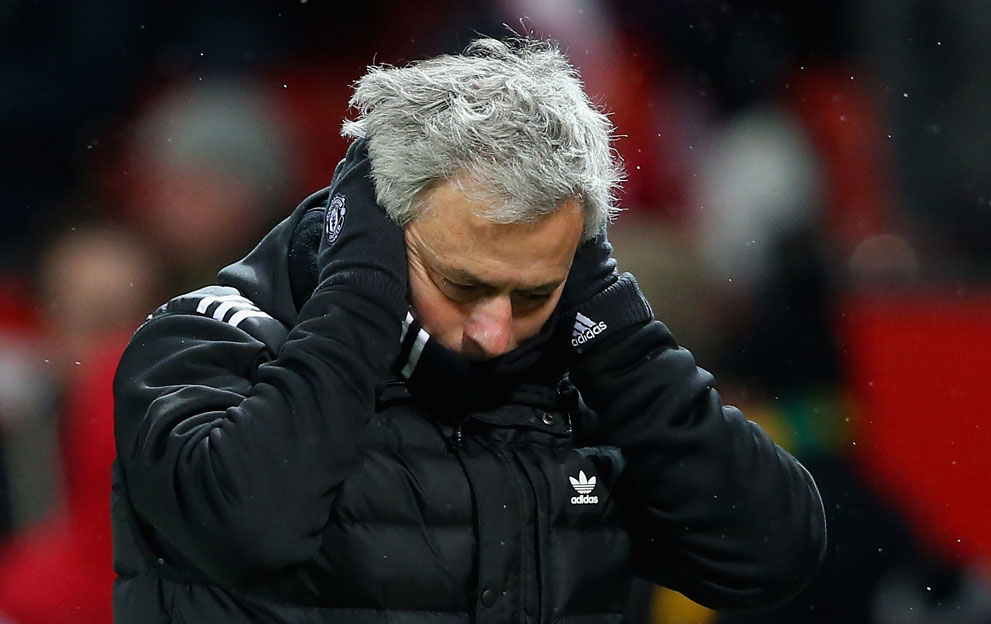 The vultures are circling Jose Mourinho again. Journalists, pundits and ex-pros have given their thoughts on the supposed systematic bullying of Luke Shaw.

The young player, who is unlikely to be on the plane to Russia this summer despite making the World Cup squad four years earlier, is failing to fulfil his potential because of the Manchester United manager, or so we are lead to believe.

The way Mourinho has treated Shaw isn’t great. He’s a young player, who Mourinho clearly doesn’t have much time for.

Some will claim that’s because he has no interest in developing young players but the fact Marcus Rashford made more appearances last year than any player in the top five leagues in Europe, or Scott McTominay’s inclusion in big games against Liverpool or Chelsea, suggests that isn’t the case.

Young or old, experienced or inexperienced, Jose wants players who work hard and follow his instructions. It appears as though Shaw has been unable to do either and has faced the manager’s wrath as a consequence.

The former Southampton Academy Director, Jason Dodd, who Shaw has previously publicly thanked for the impact he had on his career, has spoken about the methods required to get the best out of the left-back.

“You need to give him a cuddle and then you give him a little dig,” Dodd said this week. “That’s the way you’ve got to challenge him to get him going.”

There’s no doubt that Mourinho has done that, with him hailing Shaw as one of the best left-backs going only two months ago, before dropping him from the team and taking him off at half-time in United’s 2-0 win over Brighton in the FA Cup.

The things he says about Shaw should be saved for the dressing room and there can’t be many United fans who support the way that he has treated the player, yet that doesn’t change the fact Shaw has his part to play in this.

In Dodd’s interview, he went on to discuss Shaw’s work ethic, which might go some way to explaining why the player isn’t Mourinho’s favourite.

“If you had to question some of it, yeh, it’s his drive, training every day to give absolutely everything. He can have days when he’s just going through the motions, but you’re at Man United! I think Mourinho expects you to put it in every single session and that’s a probably an area where Luke would struggle.”

Of course, this isn’t the first time that the left back’s attitude has been questioned.

In fact, every single manager that he’s has played for has raised this as an issue.

They may have been more subtle in their approach to dealing with it, which wouldn’t be hard given how hard Mourinho has gone in, but that doesn’t negate the fact that Shaw has contributed to his demise.

Before signing for United, Shaw went to the World Cup with England as a teenager. You can only imagine how that would feel for a professional footballer and the lengths they would go to in order to get themselves picked so they could play for their country.

However, Roy Hodgson, the manager of England at the time, later reflected on Shaw’s approach to training that summer. He revealed that he spoke to Shaw, as well as physio Gary Lewin, “a couple of times” about his application in training. It beggars belief that someone could be in Brazil representing their country on the biggest stage and need to be spoken to at all about this, let alone more than once.

A few weeks later, Shaw got his first big club move, joining Manchester United from Southampton. He became the most expensive teenager in the world. You can only imagine how hard a young player would work to make sure they were the best possible version of themselves that they could be for when they met their new manager and teammates.

He turned up at training overweight though and was ordered to train separately from the rest of the group by Louis van Gaal until he was fit enough to play with the others.

“He is OK, but I am always a trainer-coach who sees individuals and what they need,” he said. “He needs to be fit and is not very fit and fit enough to do what I want. He needs to train individually until he is fit.”

His poor attitude has been explained away by his age but that is a weak excuse. If your dream is to play football at the highest level, then from an age much younger than Shaw was when he signed for United, you know the importance of hard work.

“I still wonder why I was invited back every year, and it can only have been attitude,” Gary Neville has said, when reflecting on his youth career at United.

“If training started at 5pm, I would be there at 4.15, passing against a wall. You have to make sacrifices. When I left school at 16, I made the conscious decision that I would cut myself off from all my mates. It sounds brutal, and it was selfish, but I knew that they would be doing all sorts of teenage things that I couldn’t get involved with, even if that was just having a few drinks. I’ll always remember my dad telling me: ‘You’ve got two years to give it a real go. Never look back and wish you’d done more.’”

Not everyone can have a work ethic like Neville, but that’s at the opposite end of the spectrum to not bothering to train hard in a World Cup or showing up overweight at your first training session with Manchester United.

Van Gaal had extremely high standards, so this might be another excuse used to defend Shaw, but the reality is that Mauricio Pochettino had the same problems with him, according to Hodgson.

“I think when he (Van Gaal) talks to Pochettino, then Pochettino will say to him, ‘What you were saying to Luke Shaw is what I was actually saying to him’. I think Luke is aware that the work rate which is required does mean that he’s got to work very, very hard on that aspect of his game. I think he’s been aware of it.”

The player himself has admitted to his lax approach to joining United, revealing that he “took it a little bit easy” after the World Cup and that he “didn’t think it was going to be as hard and as quick as it was.”

Ashley Young, a 32-year-old converted winger, who is above Shaw in pecking order for both club and country, was asked about Shaw this week when the England players went on duty in a squad Shaw has not been included in.

“I want to see him doing well,” Young said. “It’s like all players, you just have to get your head down and work. He is a fantastic player. I feel he can be one of the best in the world. As I say, you’ve just got to work hard.”

Paul Scholes has shared Young’s opinion, that he could be one of the best, but it’s hard to imagine how.

If he hasn’t realised by now that he needs to work hard in training, when will he?

This doesn’t excuse Mourinho’s public humiliation of the player but it does explain why the manager has a bee in his bonnet. Sources close to the player told media outlets this week that Mourinho should keep the situation in house, which is ironic, given they were briefing the press about the manager being a “disgrace”.

Yet if Shaw doesn’t want to be singled out for criticism following his average performances, maybe he should put the effort in on the training ground? It certainly seems to work for Marouane Fellaini!

Shaw has been at United for four years this summer and during that time has only looked like anything close to the greatest player in his position for a few of weeks, at the start of the 2015-16 season ahead of his awful injury. Further injuries have blighted his progress since then, but it’s little wonder he hasn’t developed as everyone expected when reading between the lines about his work ethic.

The former Saint may well go on to be a good player for another club, but it’s hard to imagine that someone who needs to be told to train hard at a World Cup, or who has to train separately to the rest of the squad to catch up after signing for a new club will ever be the best.

There’s something missing with Shaw, something that can’t be taught, and you won’t find any player who has enjoyed a career at the very top without it. Relying on his natural talent is not enough to be the best.

In a few months time, Shaw will likely be on his way out of the club, possibly to be reunited with Pochettino at Tottenham Hotspur. United fans may bemoan losing such a talent but Mourinho has done the club a favour, even if he hasn’t gone about it in the right way.